Disassembling the M-1911 type of pistols is a straight forward and simple process. It requires a minimum of tools (actually before Colt's Series 80 pistols, it was possible to completely disassemble and re-assemble the pistol without ANY tools), like a pair of tweezers, a punch, etc, althought you can improvise! 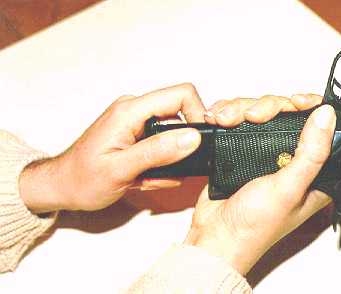 Before starting to take the pistols apart, follow one simple safety rule. Make sure the gun is empty. Remove the magazine and pull the slide back and lock it in the open position. Check that the barrel's chamber is empty. Always think safety first. 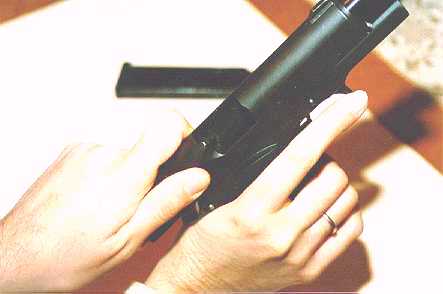 Before you proceed any further, please remember that at some time, you will have to reassemble the pistol. So please, for your own sanity, before you start taking things apart, study how things look when the gun is still intact. You might also want to read some Reassembling Notes, I 've put together. OK, here we go! 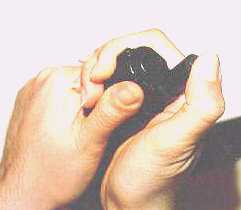 Note: The above instructions apply to the standard pistol. If you have replaced the guide rod, with a full-length one, you obviously have to follow different instructions, those supplied with your guide rod. 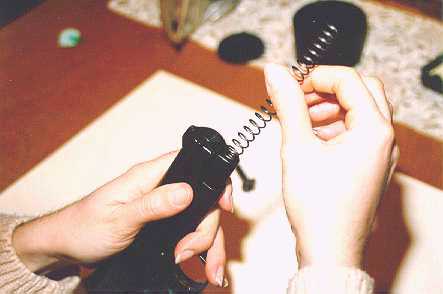 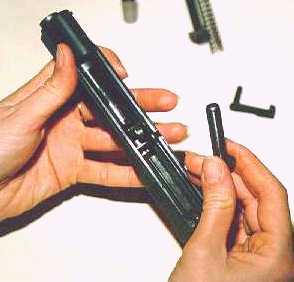 Hold the gun upside down and push the slide forward and remove it from the frame. You can remove the recoil spring guide now. 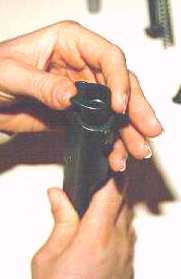 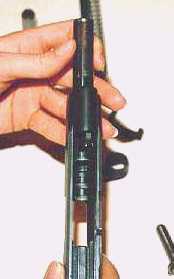 This completes the every-day field stripping procedure. It is normally not recommended to proceed any further, unless you are sure of what you are doing, in which case you wouldn't be reading this anyway, but let's go on. 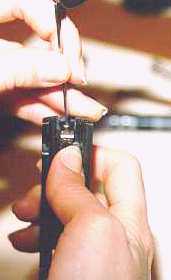 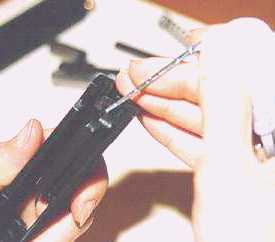 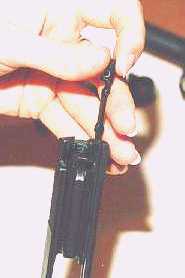 Remove it and then remove the extractor completely.

This completes the stripping of the slide. 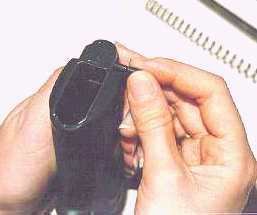 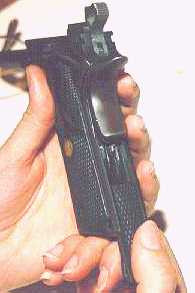 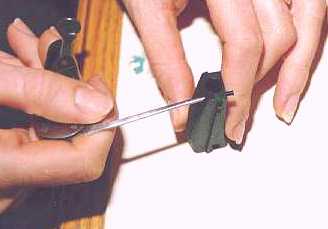 However, if you do want to do it, use a thin puch to push the Mainspring Cap Pin out, by pushing it from the outside of the Mainspring Housing to the inner side. BE EXTREMELY CAREFUL, as the mainspring is under considerable tension and it can fly away, hitting you on the face. 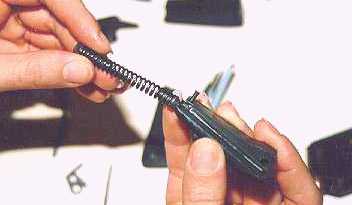 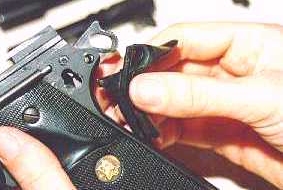 When you remove the Safety Lock, the Grip safety can also be removed. 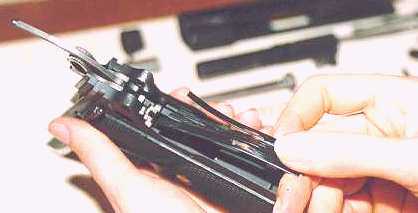 You may now remove the 3-prong Sear Spring at the rear of the grip. To do that lift the hammer strut first. 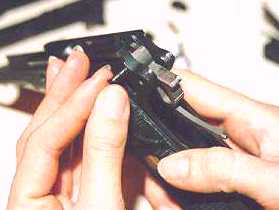 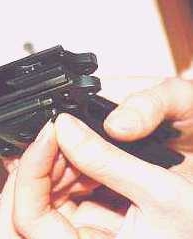 Before proceeding any further, take some time to familiarize yourself with the arrangement of the Lower Sear Lever and the Upper Sear Lever, which form the Colt Series 80 firing pin safety mechanism (if, of course your gun is so equipped). You may now remove the Sear Pin. Slowly push it out from the right side of the frame to the left. 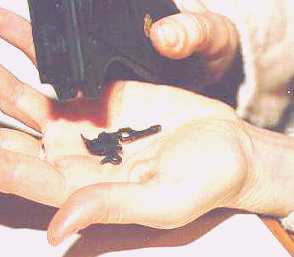 When removed, the Lower Sear Lever (for Series 80 guns), the Sear and the Disconnector can be removed. Turn the pistol upside down and let the parts drop into your palm. 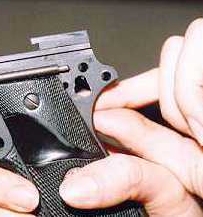 Push the Trigger to the rear and remove it from the rear of the gun. 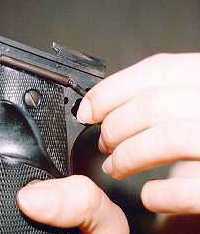 Slowly pull the Safety Lock Plunger, the Plunger Spring and the Slide Release Plunger off the Plunger tube.

That completes the disassembly of the pistol. The ejector and the plunger tube should not be normally removed from the frame. If you do want them removed, use a small punch to push out the corresponding pin, which holds them in place. The pin is located in the slide rails, right under the ejector. Push it out and then lift the ejector. Now the plunger tube can be removed. 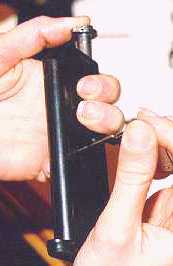 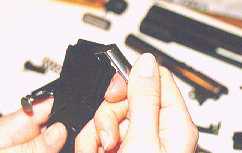 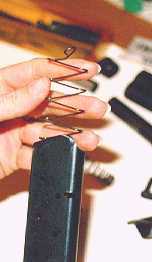 If you want to disassemble an M-1911 magazine, insert three or four rounds in the magazine. Then insert a pin (possibly the hammer strut) thru one of the magazine hole's, below the follower, in order to keep the mag spring down. Remove the rounds from the magazine and turn the mag upside down and shake it until the follower falls off. Remove the pin that holds the spring in and remove it.

Not difficult, was it?

Reversing the above procedure, you can put the gun together. There are however, some points that should be noted :

- The relative position of the sear, disconnector and if you have a Series 80 Pistol, the Firing Pin Safety Sear Lever. The following pictures can be of help.

Here are some close-ups of how the sear, disconnector and trigger should be when reassembling the pistol. 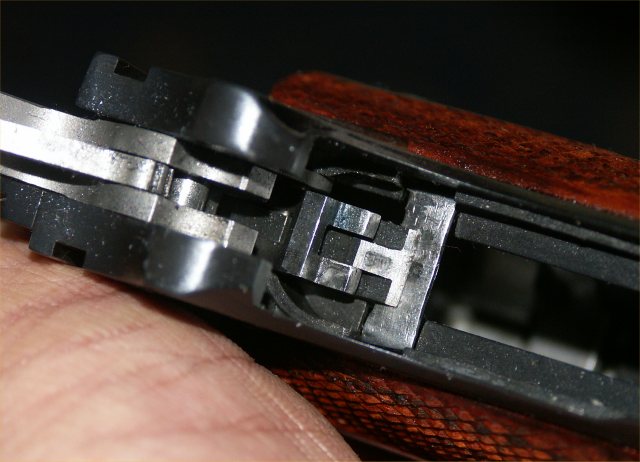 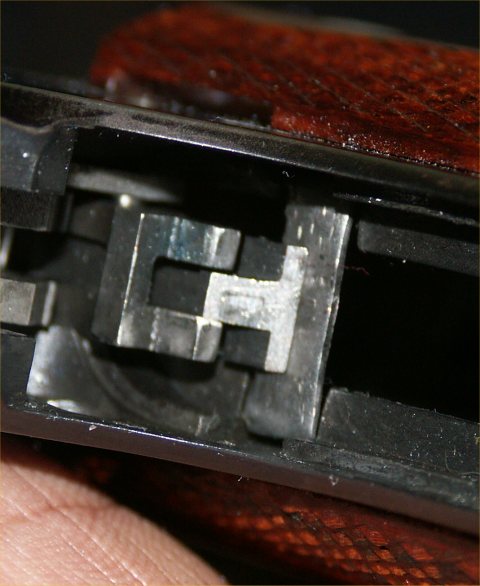 And here is how the sear spring should be inserted. 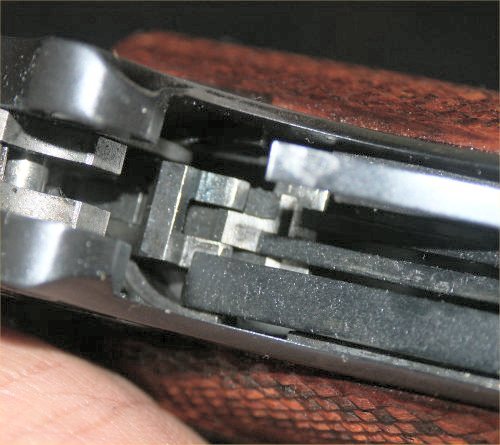 - When inserting the Slide Stop, make sure that it engages the Barrrel Link hole. To be sure, after you insert the slide stop, try to move the slide forward. It should not get more forward than it normally does.

Several people have written, asking how to insert the slide stop without scratching the frame or the slide. Let me say that no M-1911 owner I know, has managed that the first time he reassembled his pistol, so do not feel bad if your pride and joy has a circular scratch below the slide stop opening on the frame (this can be avoided easily) or worst, on the slide, right above the slide stop cut (more difficult to avoid, but not impossible). Here are some close-up shots, showing you how to do this. 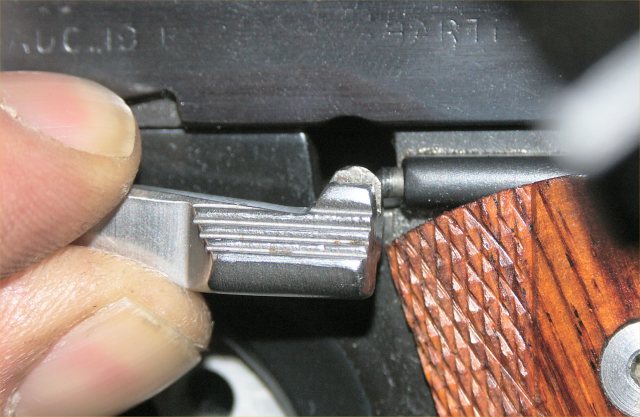 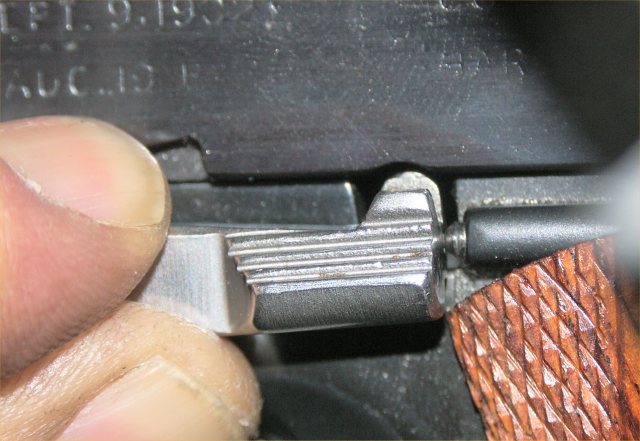 Here you see the plunger as it starts climbing to the flat slide stop face. Keep pushing inwards and upwards. 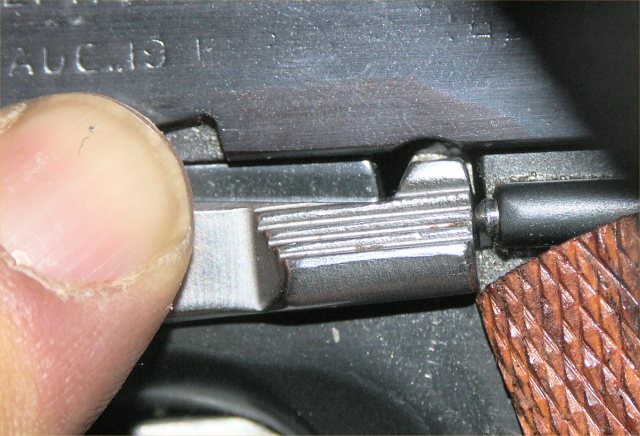 Here you can see that the slide stop has entered the frame and the slide cut, and is almost fully into its final position.

I've came up with the following two video clips, trying to better show you, how to insert the slide stop, without scratching your pistol.

- If you have taken the mainspring housing apart, be careful when putting it back together, as the mainspring needs considerable pressure, in order to be inserted in the housing, while in the same time you must put the pin back in.

Finally, thanks to Sterling Roth, a member of our Forums Site you may check out this animation, which shows you in a step-by-step fashion, how to disassemble and reassemble your M1911.

I would like to thank Sterling Roth, for allowing M1911.ORG to use this terrific tool.

After putting the gun together, try its functioning. Be extremely careful that all safety devices operate the way they are designed to operate. Feel the trigger. If something feels wrong, take the gun apart and start over again. If you fail to find the problem, take the gun to a competent gunsmith. REMEMBER : Think safety first!

Click here to return to the beginning of this page.