Saf-T-Lok is a locking mechanism produced by Saf-T-Lok Corp., which prevents pistol usage against owner's wish. This is acheived by an incredible clever mechanism which fits inside the left grip panel of your M-1911. Of course, not every grip will do, so Saf-T-Lok has designed a grip-locking system. This system was sent to me by Mrs. Jacquie Cofer of Saf-T-Lok Corp, to test (thanks Jacquie). 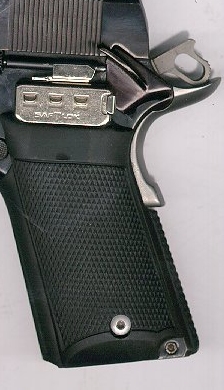 Let me first describe the product. Saf-T-Lok comprises of a locking mechanism and a set of rubber grips, like the standard Pachmayr we are all used to. The rubber grip is an one-piece design, which means that it covers the grip front strap. The right grip panel is one of the best looking ones I've ever seen (see below), in the sence that it covers almost the whole right side of the gun, much like a Sig-Sauer grip. The left grip panel is where all the difference is, as it contains the locking mechanism. This mechanism, when fitted to the gun looks like a small metallic box (appr. 3.5 cm by 1.4 cm), which has three combination levers, a reset lever and the locking slide.

The locking mechanism, which is housed inside the left grip panel, is a clever design. It is installed on your gun, by removing the two left grip bushings. Then you use one special grip bushing (a little bit longer thatn the standard one, in the lower bushing position) and a flat-head screw, to attach the mechanism's mounting plate on your gun. Then you fit the locking module, on this mounting plate, via a small hex screw. From then on, the locking module and the mounting plate are one solid piece, not allowing any malicious intervention. You then fit the left rubber grip panel above the mechanism and attach it with one standard grip screw.

The locking mechanism consists of a sliding lever, which is used to lock the thumb safety in the upper (i.e. safe) position, when it is pushed to its rear-most position. This lever has to be pushed to the rear, while in the same time you also push forward the reset switch, in order to lock the gun. This operation locks the locking slide at its rear-most position, effectively locking the thumb safety of the gun (the hammer has to be cocked of course, for this), in its safe position (i.e. up). In order to release the lock, you have to push down, on three protruding small levers, which act as the combination lock. Each lever has to be pushed down the number of times specified in your combination. For example, if your combination is 3-2-4, you push the front lever down three times, the middle one twice and the rear one four times. The combination levers are easy to manupilate, using the edge of your thumb. If you make a mistake, just push the reset lever (situated at the rear of the locking module) forward and start over again. 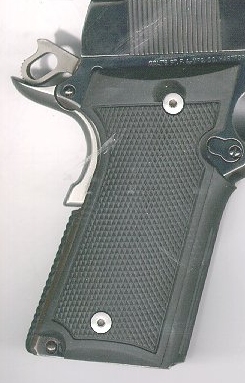 I performed a variety of tests on this device, in order to find out if it really works. I first gave the gun to my wife, a very good shooter, much better than me, but not so familiar with the M-1911. The gun was cocked and locked by Saf-T-Lok. Needless to say, she did not manage to pull the trigger, so test number one was a success. An average person who grabs your Saf-T-Lok-equipped pistol will not be able to make it fire.

I also tried to remove the thumb safety, while Saf-T-Lok was locked. Again, due to the little travel allowed by the locking lever, the thumb safety could be lowered enough to be removed from the gun. In which case, of course, the gun could be fired with no problem.

I cannot be sure, if this problem was only particular to my gun, but I would not feel safe with the way this particular pistol was locked. I would suggest that whoever invests in this device, he has it installed by a competent gunsmith, so that he can check and modify the safety lever engagement accordingly.

Finally, there are some other things that one should consider, before investing in this Saf-T-Lok. The main problem I had, was that the left grip panel is very thick. This means that the grip circumference is quite larger than the standard one. It also means that manupilating the magazine release and the slide release lever is very difficult, without shifting your hand on the grip. Actually, I could no longer hit the magazine release, without using my left hand. It was almost totally impossible to reach and press it with my right hand thumb. A person with longer fingers may not have this problem, but still the mag release button is well hidden by the big grip. Finally, engaging the thumb safety is not easy any more, as the locking mechanism box, is right underneath it, making it a more cumbersome operation, than when the gun is not equipped with Saf-T-Lok.

If you have kids in home, or you are really afraid that some one can get in your house while you are asleep and grab your gun and shoot you, then you might need this device, providing that (a) a competent gunsmith installs and tests that the thumb safety cannot be lowered enough to make the gun fire (b) you do not mind the fact that your gun becomes more difficult to handle, due to the enlarged grip circumference. If, on the other hand, you have other mechanism to warn you about an intruder (alarms, dogs etc.) then, I would suggest that you leave your M-1911 the way Mr. John Moses Browning designed it originally. As for the problem of avoiding accidental shootings, I can think of several other alternatives to Saf-T-Lok, like common sence for example. If you have a kid in the house, act responsibly. Never leave the gun in the kid's reach, and teach your kid that the gun is not to be touched, unless you are present. Or lock the pistol in a safe. A pistol is supposed to go boom, when its trigger is pulled. Installing devices that prevent this, raise the possibilities of the gun not firing, when it is actually needed. Several generations of responsible gun oweners have lived on this earth, without using such devices. I fail to see why they are so important now.

If there are any Saf-T-Lok users out there, who have found this device useful and safe, I would like to hear from them, so please e-mail me. I wouldn't like my comments and findings to be the only ones appearing here, for such a safety device, which can (if properly fitted) work.

I would like to close this test, by thanking Saf-T-Lok for sending me their product for this test, especially Mrs. Jacquie Cofer.

Following this, I am very pleased to report that Saf-T-Lok asked their chief engineer to contact me and discuss the above mentionned problem with me. It is obvious that with all the variations that exist in the M-1911 world, such a device which affects the safe functioning of your firearm, should be installed by a gunsmith, who can for sure, take care of the problem. It is also apparent that Saf-T-Lok stand behind their product, and this is quite important.