Surefire has been known for producing very high quality flash lights for the demanding user. So it was only natural that when the latest mania started, with pistols having integrated light rails, that they would come out with some special light, which could be mounted on a light rail for tactical use.

The light that Surefire offers for mount on a Universal or a Picatinny rail equipped pistol, is the Surefire X200. This is an aluminum body 5 Watts LED flashlight, produced in two versions, the X200A, which is for general use and CQB, while the X200B uses a micro-textured reflector, offering a wider beam, for better peripheral threat identification, thus more suited for use in enclosed structures (that means inside a building). So when Nighthawk Custom offered me one as a gift, I of course accepted. And I was very eager to see that light as my experience with my old and trusty Surefire 6Z has been excellent.

The model I received was the X200B. The light arrived in a small carton box, with an opening through which the light was visible. 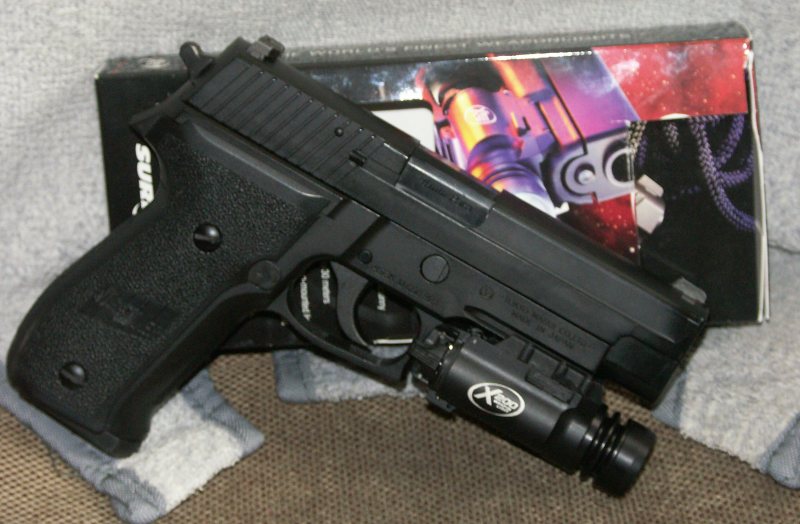 Don't be surprised by the pistol used, when the light arrived, I had no real pistol equipped with a light rail, so I just mounted on an Airsoft Sig Sauer P-226, which was thus equipped. 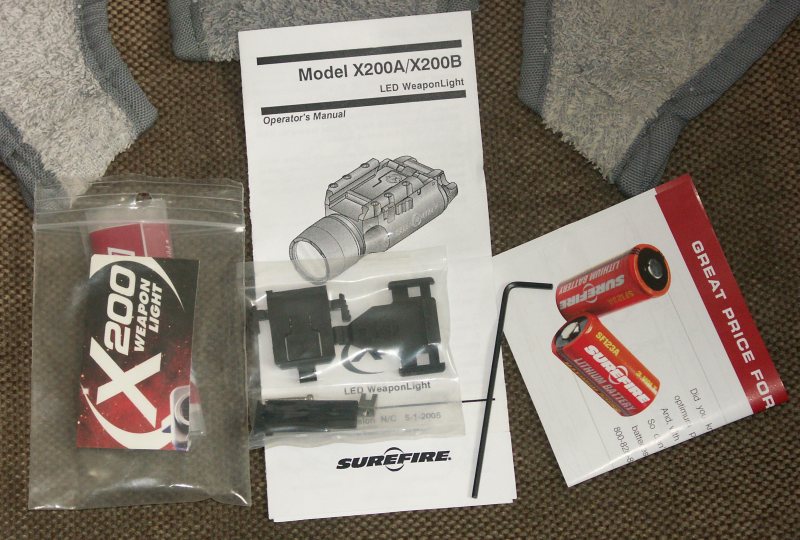 Together with the light, in the box, the owner gets a very detailed instructions manual, three different adaptos, which allow you to mount the light in either a Weaver (Universal) or a Picatinny light rail, in a semi-permanent (i.e. easy to remove) or more permanent (more difficult to remove, but more secure) fashion. You also get a tube of Loctite, and a colorful reminder of how good Surefire CR123A batteries are. 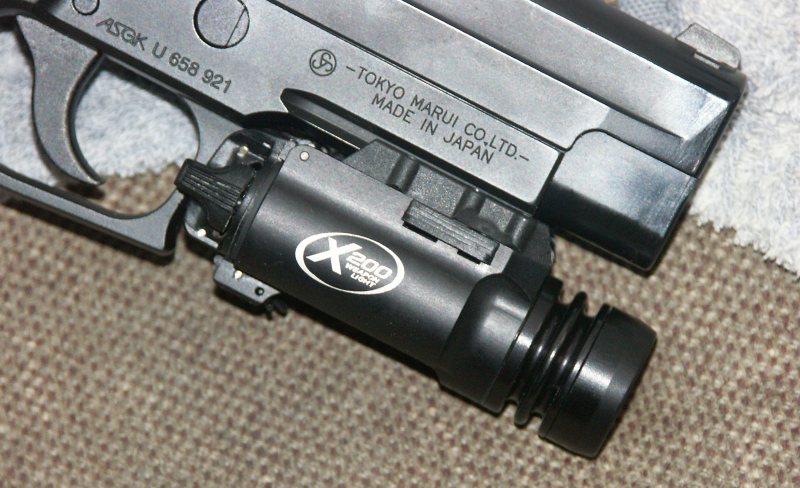 I took the light out of the box and assembled it. The assembly consists of mounting the rear cap on the light (which also includes the light's switch), put the batteries in, and secure the cap with the included retaining pin, which prevents the battery compartment from opening up in the wrong moment (more on these later). I then installed the light on the P-226. The light went on just fine, and you can see how compact it is. 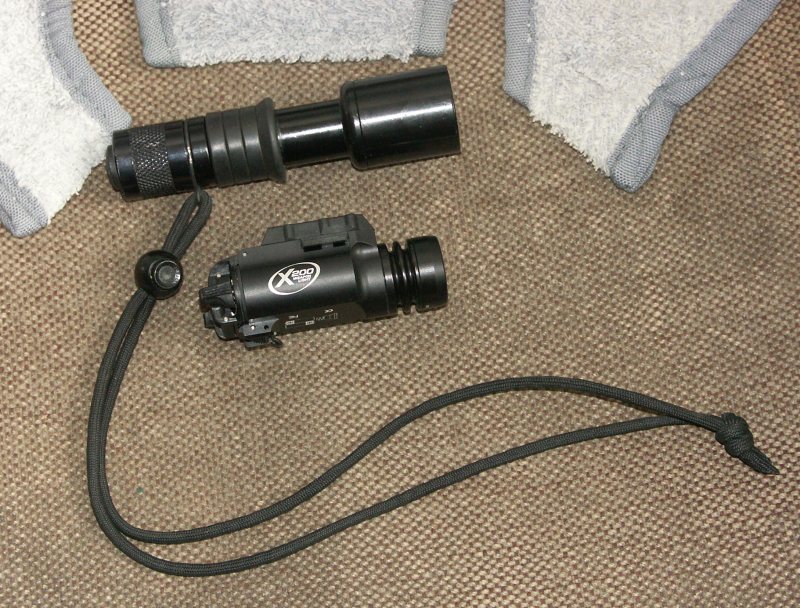 To get a better idea of the size of the light, in the picture above, it is shown together with my old Surefire 6Z flashlight. 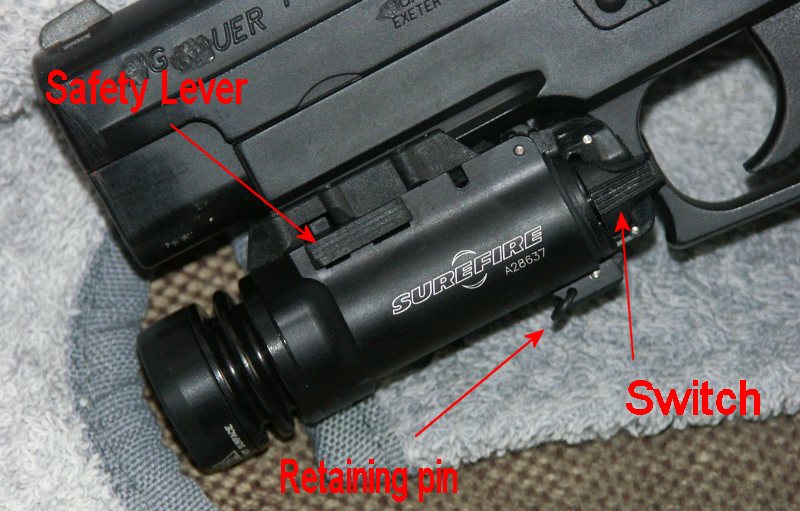 In the picture above, you can see the location of the switch, the retaining pin ad the safety lever which locks the light in position, on the Universal (Weaver) rail. 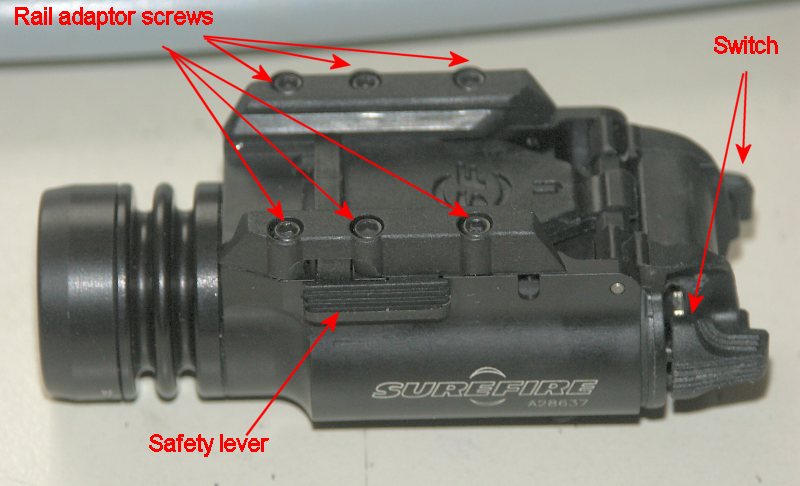 In the picture above, you can see more details of the light. At the tail cap of the light there is the rocker switch, which is used to operate the light. By pushing the switch up or down, you turn it on in the permanent mode, while if you push either side of the switch towards the front of the ligth, you turn it on momentarily. The six screws you see above, secure the rail adaptor to the light's body. If you want to change the adaptor, you just remove these screws, change the adapter and put them in again. Surefire even provides you with a tube of Loctite, so that these screws are securely mounted. Finally, the Safety Lever, is pulled down to mount the light on a rail and to remove it. 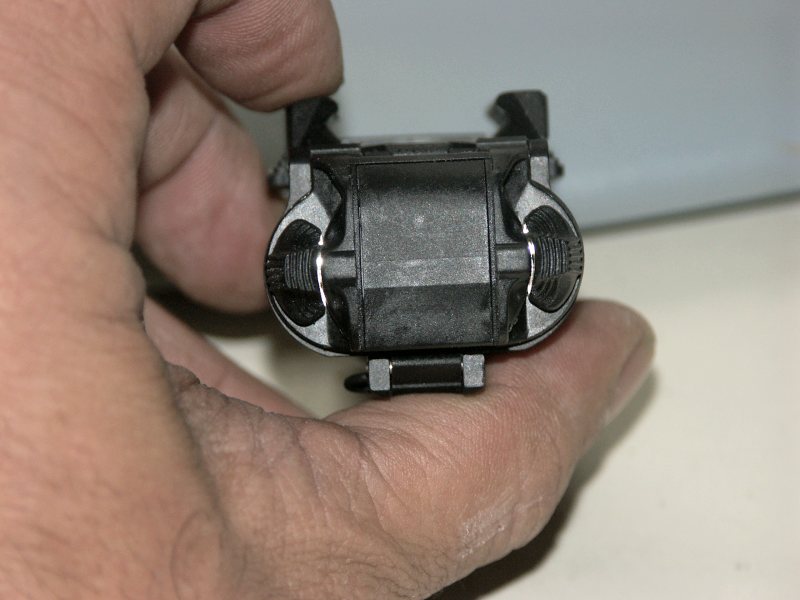 In the picture above, you can see the arrangement of the light's switch. 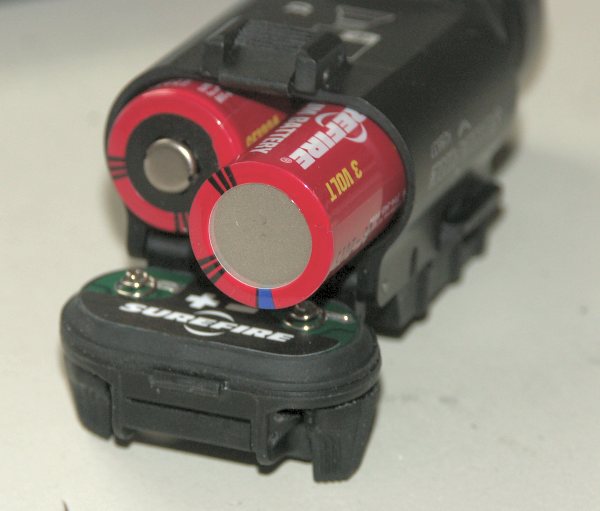 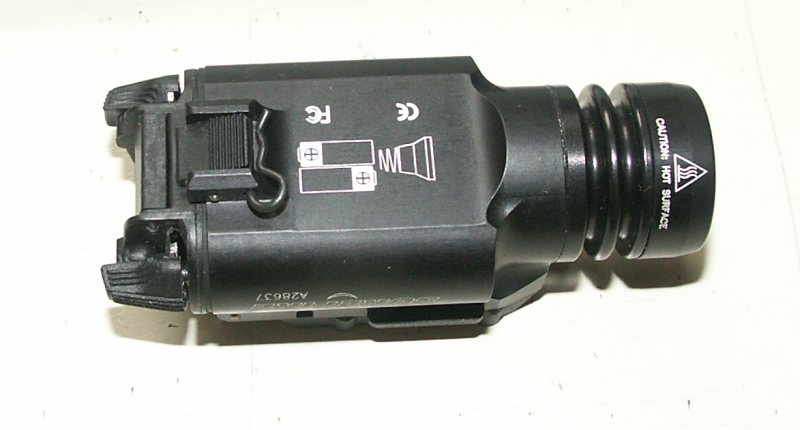 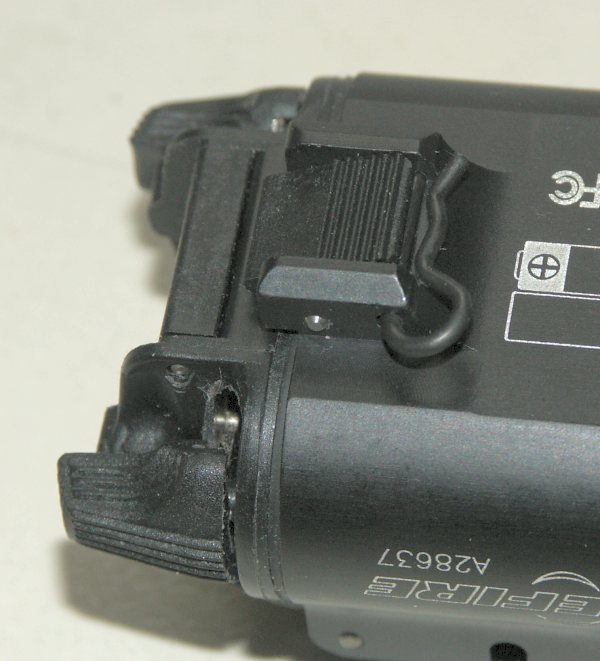 In the pictures above, you can see the tail cap opened, to insert the two 123A type batteries (included with the light) and then in the closed position, with the retaining pin installed. This arrangement is very secured, considering that the tail cap is a tight fit on the light. With the pin inserted, there is no way for the tail cap to pop open in an inappropriate moment. 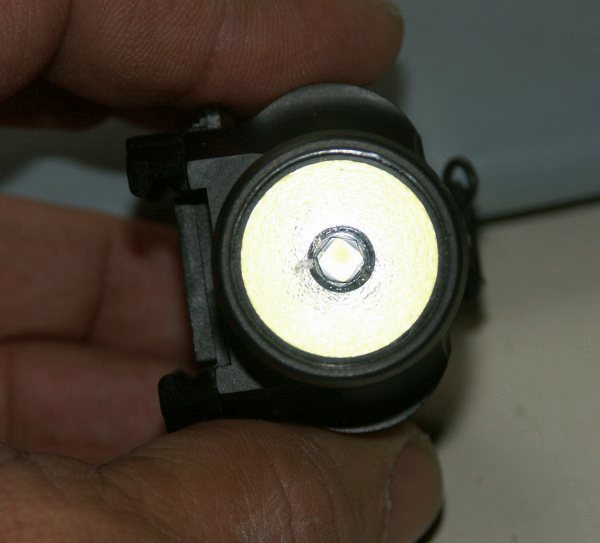 Finally, in the picture above, you can see the LED powering this light, and its reflector.

I used this light with the P-226 pictured above and I was happy by the amount of light this little light produces. Room clearence exercises were conducted (well, the wife was not at home, and the twins were asleep, otherwise, they would think I am nuts, but anyway) and the light is an exceptional tool for such work.

In the picture above, you can see the light output of the X200, compared to the 6Z with the P-61 Lamp Assembly (120 Lumens) and finally the M3-clone with the P-60 Lamp Assembly (65 Lumens). As you can see, the X200 outputs more or less the same light, as the M3 clone, which is using the P-60 lamp assembly, so I would say the light's output is about 65 Lumens. However, the X200's pattern is a bit wider than the M3's one, so it looks as if the special reflector used in this light is indeed doing its job. The X200 light is more blueish, than the light emitted by the two other Surefire lights, which are of course incadescent lights. This blueish tint is more relaxing to the eyes than the reddish tint of the incadenscent lights.

The wider beam that the X200 casts, allows the user to see clearly a much larger area, thus threat identification is much easier. On the light output front and the pattern, this light is a winner, even though it does not reach the light output of the 6Z with the 120 Lumens lamp.

However, using the light gave me a big surprise and a great disappointment. The switch used on this light, definitely needs to be redesigned. Let me explain:

As I said before, the switch must be pushed towards the front of the light, to swith it on momentarily, while it must be pushed up or down, to switch the light on permanently. However, both of these actions require excessive force. I mean pressing the switch forward to turn the light on, requires so much force that the entire pistol moves in your hand. Enough to see the difference in your gun's sights. The movement of the switch downwards requires so much force, that my extended index finger had a hard time switching on the light. Moving it upwards with the index finger of my shooting hand was next to impossible. And unfortunatelly, the downwards movement of the switch is not spring-loaded enough, so the switch does not return to the off position, if pressed down slightly.

Now, my 80$ M3-clone, which admitedly can be self-destroyed if I ever use it on a real pistol, has a different rocker switch. You press it up or down a little to switch the light on temporarily, while with some more pressure it locks into place and the light is on permanently. However, the pressure required to perform these actions is much, way much less than what is needed on the X200 and the movement of the switch is spring-loaded. A little pressure moves the switch down and turns the light on, when pressure is removed, the light is switched off. Using that light on a gun is a pure delight, as it allows you to manipulate the light without this operation to cause any movement of the gun. With the Surefire, the same operation becomes a chore.

Being puzzled by this stiffness of the switch, I emailed Surefire to discuss the issue. The Customer Service dept. was quick to suggest that I return the light to them for checking. Great idea, if I lived in US, but sending it back from here, would cost me about 50$ (insured mail)! Thank God, when I called them on the phone, a very helpful representative agreed to send me a new tail cap, to see if it makes any difference. Unfortunatelly, the tailcap was send obviously via USPS Surface Mail, instead of AirMail and after more than a month it hasn't been delivered to me.

Being totally frustrated with this light, I tried to find another contact within Surefire, to see what could be done for this problem. I finally managed to get in touch with Kadra Pattison, Public Relations Coordinator, who took it upon herself to help me out. Kadra DHL-ed me two new switches, that are supposed to be used with the X200. Below you can see the X200 with those switches. 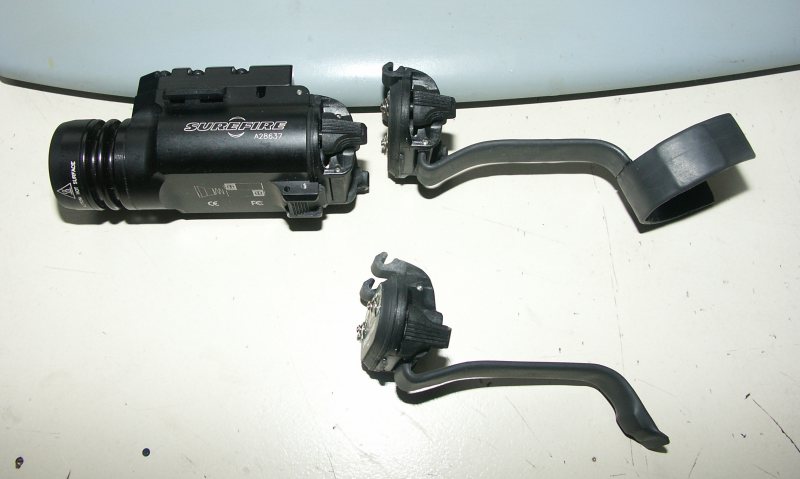 Unfortunatelly, those switches are pressure switches, which are operated with the shooter's middle finger. I think they may be useful for a ... tactical operator (whatever that means), but I sincerely doubt if the average Joe could find them of any use. The average shooter has been taught to put maximum pressure on the middle finger, since this is the finger that is used to hold the pistol steady. It's rather impossible and non-intuitive for the average user, to control the pressure switch with this finger, since he always grasps the pistol, as tight as he can with it. So these switches are not for me. 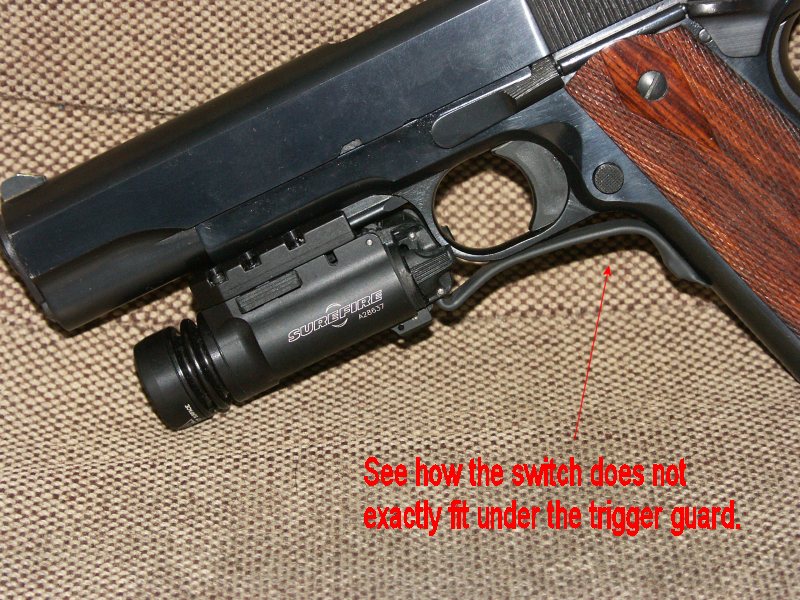 Mind you, if you try to use these switches on a 1911, equipped with a Dawson Precision light rail, it is possible that they won't fit correctly. As you can see above, the pressure switch does not mount exactly under the trigger guard. This can be due to the light rail, though, so I do not hold Surefire responsible for it.

My next step in improving the X200 switch was to use some old-fashioned lubrication. I dropped a couple of drops of Gun Butter at the switch and let it soak in for a while. The action of the switch became less stiff, but still, it is nowhere near as smooth as that of the cheap M3 clone.

I am not sure if the tailcap switch will eventually survive the Gun Butter treatment, or not, but I do not actually care much. This light, no matter how shock-proof it is, how good light beam it has, how battery efficient it is, or whatever, is seriously handicapped by its toggle switch. I would urge Surefire to hurry up and come out with a better alternative switch, or else I am sure they will be loosing sales to the Insight M3s and M6 as well as the cheap clones of these lights. Luckily, the X200 is designed to accept different tailcaps, so a different switch wouldn't require a major reengineering. Surefire, if you are listening, please give us a switch we can operate, without doing one-finger weight lifting exercises.

Notes: I want to thank Kadra Pattison, Public Relations Coordinator at Surefire, for her support. Kadra went out of her way to ship to me, whatever switches Surefire had for the X200, to try them out. It's unfortunate that these switches are not my cup of tea. Thanks Kadra, sincerely appreciated.