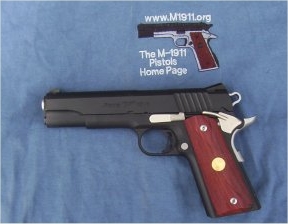 The page you are currently viewing contains the first real handgun test, performed by M1911.ORG. Due to my location (I live in Athens, Greece), it is not easy for me to do such kind of tests, due to the laws and bureaucracy involved. So, making this test a reality was quite a task.

I have to thank the following people for their contribution, in making this test a reality:

Gentlemen, I sincerely appreciate your contribytion.

Time to move on to the test itself, here is what James found about this pistol. Italics show comments of mine.

The new Para-Ordnance PXT pistol comes in a green plastic lockable gun box that has a sticker stating the pistol is not to be sold in the state of Massachusetts (this state is trying so hard to immitate California LoL). 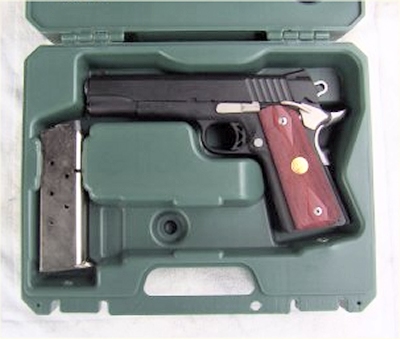 The lower half of the box contains the pistol and two magazines. 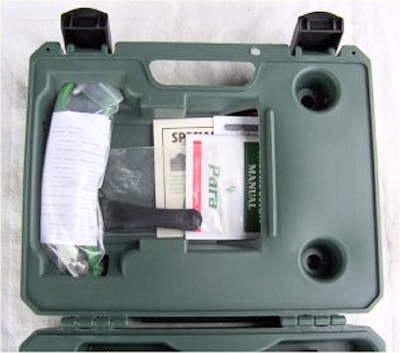 The top half of the box contains a cable lock, muzzle bushing wrench, three hex wrenches of different sizes, an instruction booklet, a coupon good toward the purchase of night sights, a packer's check list, an informational sheet on the Power Extractor and a small bag containing a fired cartridge case for those areas that require a case be turned in to the authorities.

The pistol itself is a departure from the rest of the Para line in that it is a single stack, single action 5" pistol making it the first true 1911 from the company (I remember we were talking about single-column, single-action 1911s with Thanos Polyzos, about a year and a half ago, and at that time Para had no intention of coming up with such a pistol. It's nice that they changed their mind). The pistol wears the new Para Kote Regal black finish and has stainless small parts; hammer, the thumb safety, grip safety, magazine release, slide release, hammer and sear pins, full length guide rod and grip screws. 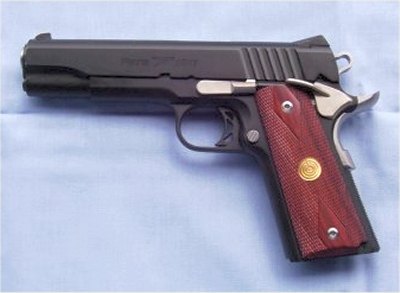 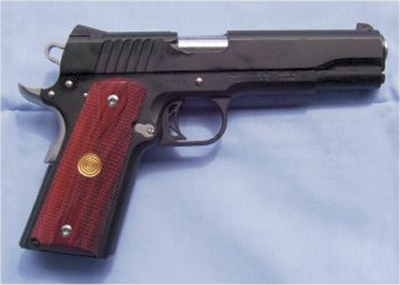 The stocks are double diamond checkered with gold Para logo medallions. I could not find any flaws in the checkering. One nice touch is the "O" rings on the grip screws to help assure they do not loosen in use. The pistol has the "Series 80" firing pin safety. The stainless barrel is ramped with a notch in the barrel hood for a loaded chamber indicator. The polymer trigger is equipped with an over travel screw and is set correctly from the factory and the trigger was factory adjusted for a 4 - 5 pound pull. 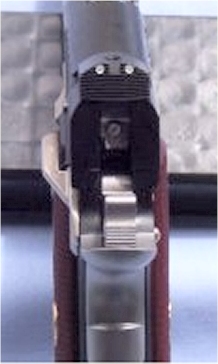 The sights are of the three dot variety designed by Para-Ord and are dovetailed in the slide. The rear sight is not flat across the top but is arched. The flat mainspring housing is checkered 20 LPI. The supplied 7 round magazines are made of stainless steel and have the Para logo on the toe of the welded base. The magazine followers are polymer. All in all an impressive looking pistol from the Canadian company.

Their new extractor is much bigger than the stock extractor that was designed by Browning, the claw being twice as tall and wide as the claw on the original extractor as far as I could tell. It is a 4 piece unit; body, spring, plunger and claw that hook together to supply the needed tension to make the extractor work. I did not strip the extractor from the slide as I did not want to take a chance of losing either the spring or the plunger. 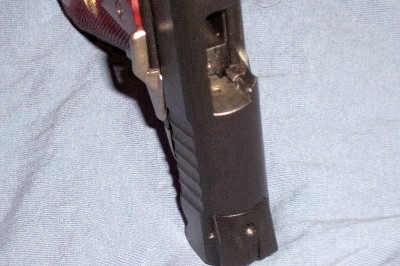 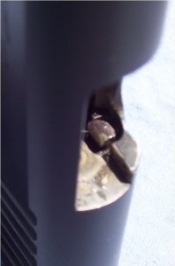 Here is a leaflet about the extractor that came with the pistol. 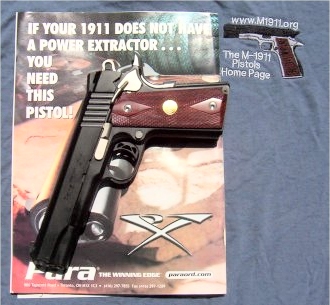 The Friday after I received the pistol, a group of shooters met on a friend's northern Michigan range for a 3 day shooting trip. This gave me a chance to shoot the pistol and have others fire it to see what they thought. I found upon inspection of the pistol in the sunlight that the bore was badly copper fouled when I received it. Not wanting to spend a large amount of time removing the fouling, I loaded up several magazines, of various makes, with fresh 230 grain PMP FMJ ammo and set up a Mils-Park target at 25 yards. Using a two hand hold with a forearm rest I found the pistol was shooting about 6" low at that distance. I had two other shooters try the pistol with the PMP ammo and 230 grain S&B FMJ ammunition. They both were shooting low at the same distance. Not wanting to file the front sight to bring up the point of impact, we continued shooting with the knowledge the pistol shot low. The first day over 200 rounds of PMP ammunition was fired as well as 50 rounds of S&B with no failures of any type. 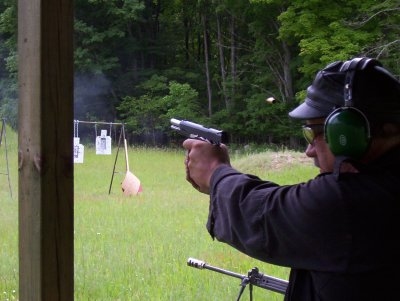 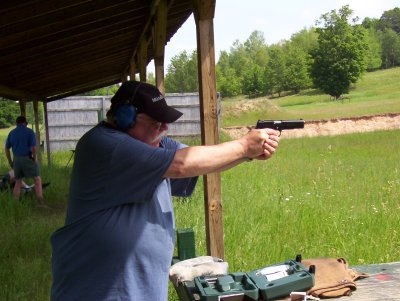 On Saturday more shooters tried the pistol with a variety of ammunition; PMP, S&B, Winchester White box, and Wolf steel case. They all commented on the pistol shooting low. It was after 500 rounds that we experienced a failure to extract completely; the fired case was removed from the chamber and then left in the ejection port. The next round in the magazine jammed the empty case against the slide and locked everything up. 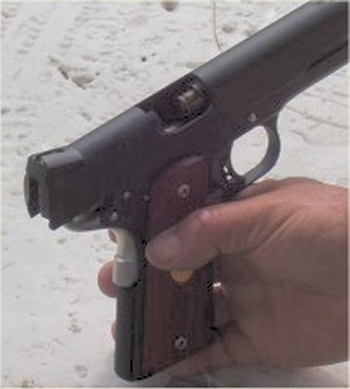 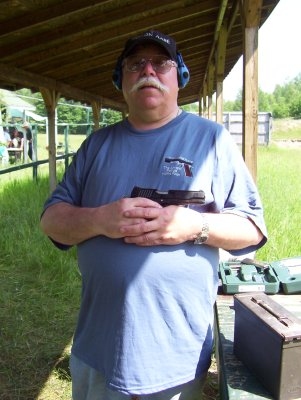 Sunday, several of those who fired the pistol before wanted another chance to shoot it. At close to the second 500 round count, the failure to extract correctly problem again appeared. I don't think the problem was caused by bad magazines since I had just fired 100 rounds of PMP using them with no problems. The problem could have been caused by the lacquered cases of the Wolf ammo being fired at the time but there had been 50 rounds of Wolf fired earlier with zero failures to feed, fire and eject. Another fast cleaning of the bore and chamber and the pistol was back in business. The bore fouling appeared to be getting worse after over 1,000 rounds of various makes of ammunition. 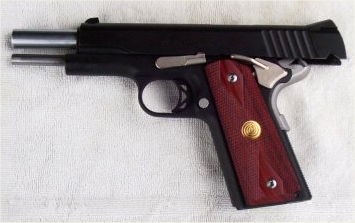 All in all, I like the pistol despite the fact it shot low and the bore was fouled when I received it. I'm glad that Para-Ordnance has decided to build a true 1911 for the first time. I do have my reservations on the Power Extractor since if one were to lose any part of it the pistol would be an expensive paper weight until a new extractor could be delivered. The larger size of the Para extractor would prevent a standard extractor from being used until the new unit arrived. The new extractor could not be retrofitted to an older 1911 without re-machining the slide. If I were to keep the pistol, I'd replace the front sight with a shorter one to bring up the point of impact, the full length guide rod would be replaced with a stock one and the flat mainspring housing would be replaced with an arched Smith and Alexander stainless housing.

Obviously, this was a pistol that has been used before, maybe by reporters. The fact that the barrel was fouled, is not important. I share Jim's reservations about the new extractor, even though Para is trying to improve on one area of the original design, which is a problem some times, the Power Extractor adds complication and difficulty in finding parts. Another thing I do not favor, is ramped barrels. Nothing bad about them, it's just that I do not find them necessary in a .45 ACP. If I were to keep this pistol, I would only change the sights. I like flat mainspring housings and I love the black pistol with stainless controls. Overall, a welcome addition in the 1911 world, from this Canadian company.