A little while ago, a certain John DiPrizio contacted me, asking if I wanted to exchange links with his site. As I always do, before answering such a request, I visited his site, and I fall on some pretty unusual grips, for the 1911. To better understand what makes those grips special, here is the introduction from John's site:

This past Fall I received an inquiry from a customer if I could do something that would compliment his "Ed Brown Custom Kobra". After a good deal of R & D, I developed this snake scale checkering/carving. It provides a grip that not only looks good, but has a secure positive feel. They'll dress up any pistol*, as well as work with those with snakeskin metal treatment or names. (Python, Kobra, and so on...)

Well, what John has done, is to come up with a checkering pattern, which looks very much like the checkering done on Ed Brown's Kobra series of pistols. I thought that the checkering looked very interesting, and I asked John if he could send me a set to try out. John was kind enough to oblige me with a set, which arrived at my house soon after the e-mail exchange. 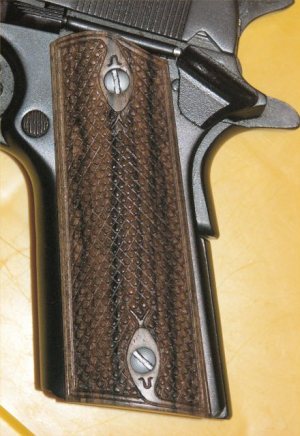 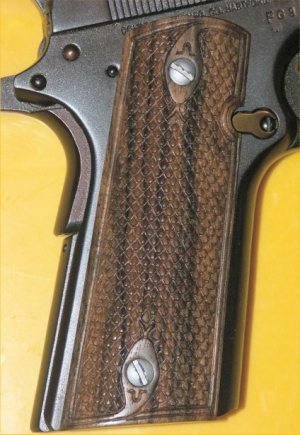 I opened John's package, eager to see up close, what this snake scale checkering was. As you can see above, the set John send me, was a set of full-size grips, without the oval cut at the lower rear corner, so the mainspring housing pin is completely covered. I am not sure if I like this feature or not, but it sure made my 1911 look different.

Taking a closer look at the grip's surface, I noticed the characteristic checkering. See the pictures below: 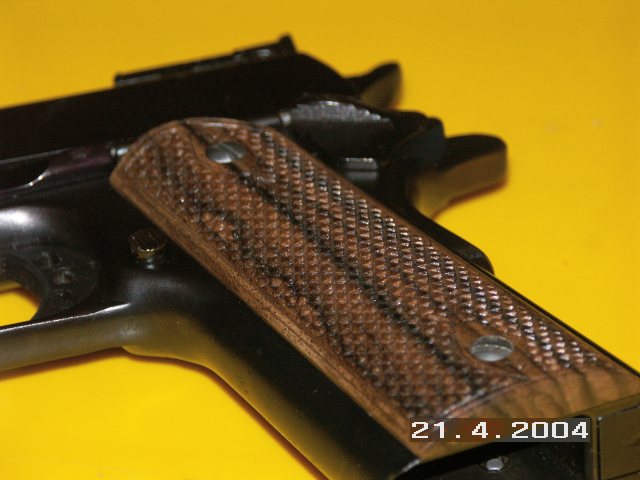 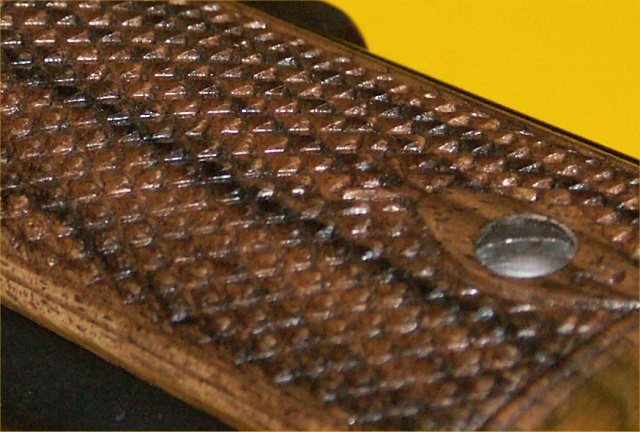 I hope that the above pictures are good enough to show the special checkering that makes these grips so unique. It looks as if each little element of the checkering is coming out of the wood material, not like the normal checkering bits do, from the grip's surface vertically up, but from the grip's surface down. According to John, this is very much how a snake's skin looks. I have never seen a snake from up close (and I do not plan to do so any time soon, I hate snakes), but John has some pictures (shown below) to prove the resemblance:

Compare the picture shown at left, which is from a snake's skin, to my picture above, and I am sure you will note the similarities. I guess John is right in calling those grips "Snake Scale" grips.

I installed those grips on my M-1911 and tried them out for a couple of days, doing several quick drawings and presentations. They do provide a very secure grip, with no slipping of the firearm even when your hands are sweating. To be honnest, at this time of the year (April 2004), Greece is entering Spring, so temperatures around 20 C, are becoming normal. Quite hot for the period of the year, but still not enough to cause my hands to sweat. So to simulate the humid conditions, I wetted my hands with some water and tried the presentations. No problem whatsoever. I also gave them a fair try, during a visit to our local range. As I expected, John's grips performed perfectly.

One final detail I liked. We all know and love the double-diamond grips, right? You know, the ones with the diamond shape around each grip screw. Well, John has created a similar pattern on his grips too, but appropriately, he used a snake's head for that. Check the pictures below: 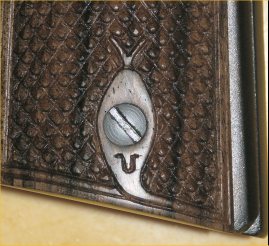 Actually, John is producing his grips, using two different snake heads for the area around the screw hole, as well as the traditional diamond pattern.

Although the color of these grips in not my favorite, warm, nice color found in a Cocobolo set, (I do not actually know what wood this set is made from), this is just a personal opinion. I think that John had a great idea there, and I am sure his grips will be quite successful. Not only they look great, but they also work, providing the shooter with a very secure grip. What more can one ask, from a set of grips?