First of all, let me clarify, that this is not a formal test. This report was prepared and published here, after a recent reorganization of my study at home, when I found some pictures which I've taken some years ago (I think it was 2000) in Las Vegas, NV. I was planned to have a business trip there (back then I was in the telephony business) and I stayed at my friend's Ike house. Now, Ike is a Class III FFL dealer (I think this is what you call people who are allowed to buy and sell fully-automatic weapons), and an avid firearms enthusiast. His house is like paradise, for anyone who is interested in firearms, and especially in those who fire more than one rounds, every time you pull the trigger. Of course, this report is not a test of these weapons, it's just a story, about how much fun I've got playing with them.

Since the evening I arrived at Las Vegas, Ike and I spend quite some time talking about firearms and looking at his impressive collection. Ike has two or three full-height safes in his home, all of them filled to capacity with firearms. In the picture below left, you see me, holding a baby Glock in .40 S&W, in front of one of these safes. This was the first time I've seen one of those really small Glocks. 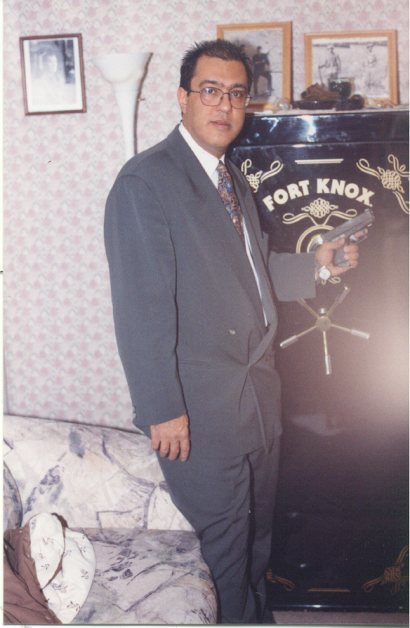 In the picture below right, you can see me in front of another safe, holding an M1 Garand, probably the best looking one, I've seen in my life. Please keep in mind that in Greece, semi-automatic and fully-automatic rifles are forbidden for the general public, so the only contact most of the Greeks get with an M1, is during their army period. 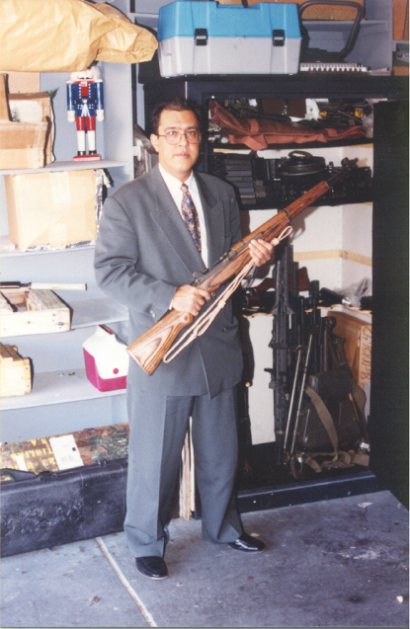 During my one-week stay at Ike's, the most discussed topic, was of course his collection of fully automatic weapons. Ike is rightfully proud for it, and I got astonished when I heard how much some of these babies go for, in the market. Of course, Ike could not pass the opportunity to show me his babies in action, so one evening we spend several hours loading magazines and belts with rounds. If you think that loading a 17 or 19 9mm magazine is difficult, wait 'til you try to load a 30 rounds one! Or even better, wait until you load about ten of these things! Next morning, we loaded Ike's truck with the most important pieces of his collection, and we headed out to the desert. Ike drove us to a place where he usually shoots, and we spend some time unloading the goodies from his truck.

Below, you can see the tripod mounted weapons we had with us. 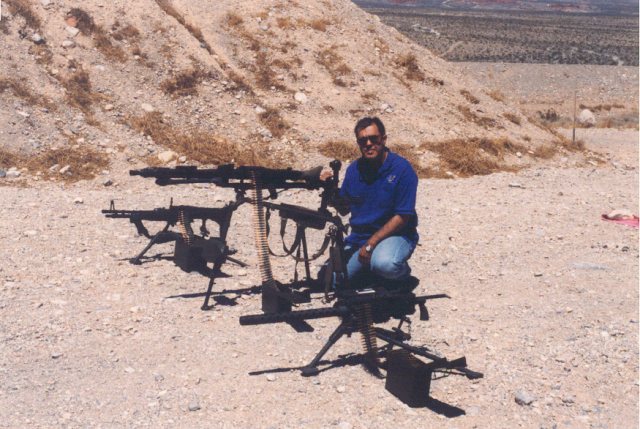 The firing range was nothing more than a dirt alley about 100 meters long, with small hills of dirt covering the three sides of a rectangle. The range was in the middle of the desert. A perfectly safe environment to test those weapons. We started with the above machine guns, and believe me, it was a huge fun watching small rocks being torn to pieces as you sprayed them with rounds. The tripod-mounted guns allowed an acceptable level or precision, even for someone with no experience with fully automatic guns. Pretty soon, I was able to hit stones, the size of a head, at the end of the alley.

Then, we unloaded the ... portable weapons. Since I knew that the tripod-mounted ones were definitely a no-no for Greece, I wasn't really very exhited with them. The portable ones, were closer to me, so I was anxious to try them out. Below, you can see me firing some of them. 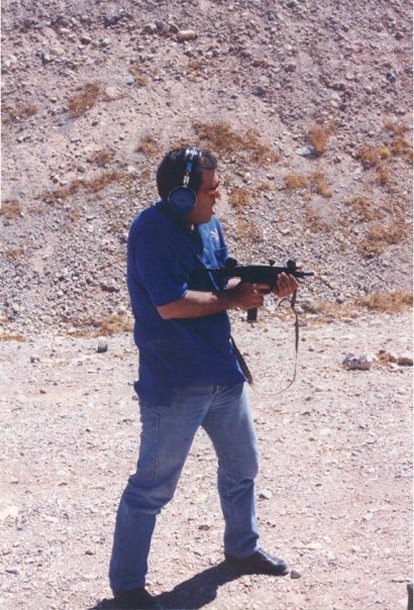 An IMI Mini Uzi in 9mm 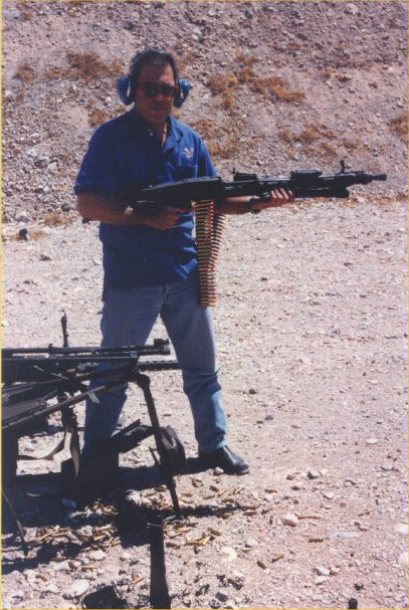 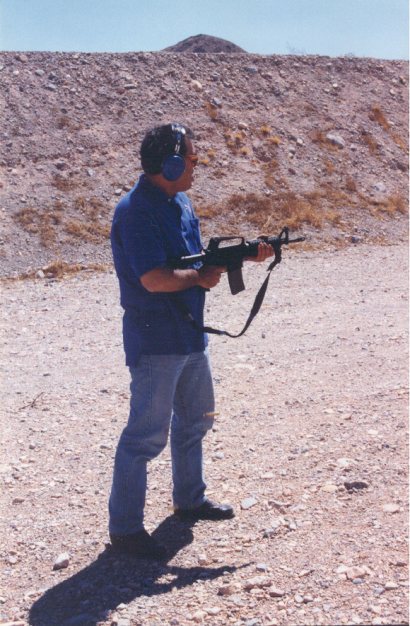 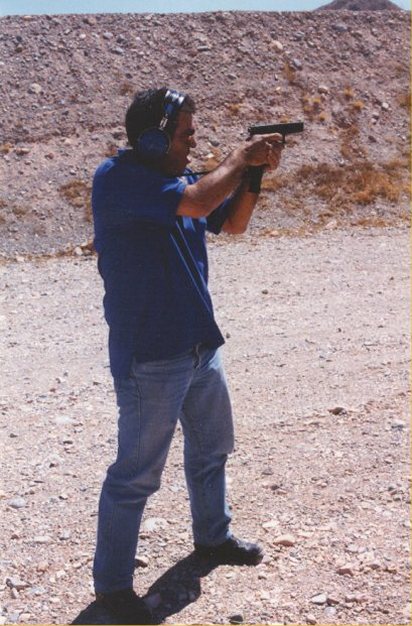 A Glock Model 18 with a folding stock. 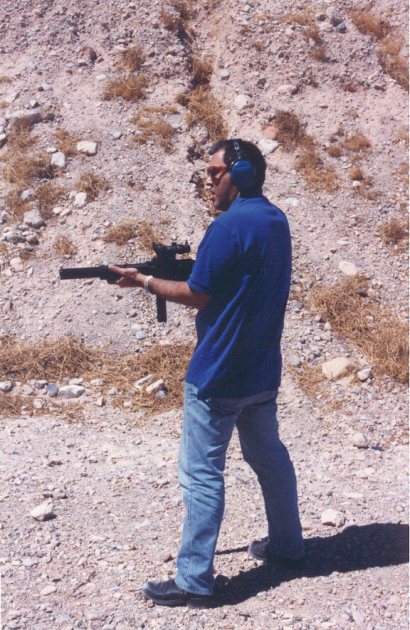 .We spend several hundrends maybe a few thousands of rounds that day, having a great fun. I especially liked the M16A2, such a lovely rifle. I wish we were allowed to have such firearms in Greece. Loading the truck with all the goodies again, and driving home, was a sad time, neither of us wanted to leave, but we have used all our ammo supply (and believe me, we had several ammo cans full, when we started the day) and the noon sun in Las Vegas is not something you really enjoy.

Although I haven't seen Ike for a couple of years, I would like to thank him for this lovely experience. I got the opportunity to try out some weapons, which are out of reach in my country, and have real fun firing them. Thanks friend!