One day, I received an e-mail from a guy who wanted to send me some cleaning rod to test. I though OK, a cleaning rod is a cleaning rod, so what's there to test? We exchanged some e-mails with Roy (that's the name of the owner of the company which makes these rods, as well as the inventor behind them), and from this discussion, it was obvious that Roy had something different in his hands. He told me to spend some time in his web site at http://www.boresweeper.com, to get an idea of what his bore sweepers were. I did and the more I read about them, the more I wanted to try them out. So I agreed for him to send me some samples. 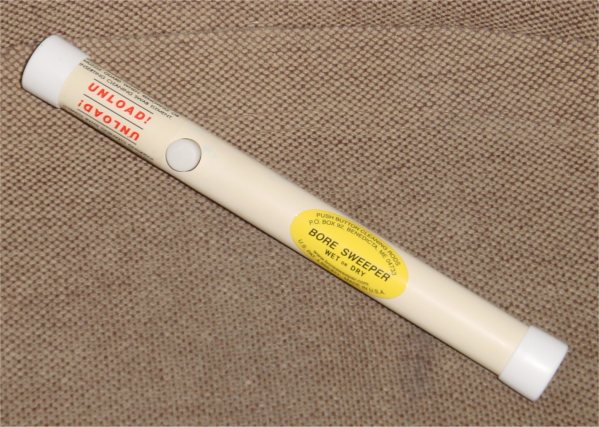 After a few days, a small package arrived and I opened it to find some ... tubes. The bore sweeper is in reality a plastic tube, about 24 cm long (that's almpost 9.5") with two plastic caps, one at each end. Towards one of the tube's end, the one marked with a label saying "Unload", there is a small button. According to the instructions, in order to use the sweeper, you have to remove the cap closer to the button. So I removed the cap and pressed the button. Nothing! OK, back to the instructions, which say clearly that the tube has to be held vertically in order for the sweeper to extend. Oh, silly me. OK, turn the sweeper vertically and there! a rod pops down with a typical cleaning brush at the end.

Wait a minute, that brush is not that typical. First of all, it combines two brushes in one, the tip of the brush features a typical bronze wire brush, which is then followed by a part which resembles the standard felt-tip brush you usually put in your Hoppe No 9 bottle, to clean your bore with. Still further back, there is a plastic ring (see picture above). What on earth is this? The brush will never go in the barrel, the plastic ring is bigger than the .45 bore! And why is there this spring, right after the brush? Back to the reading session again. 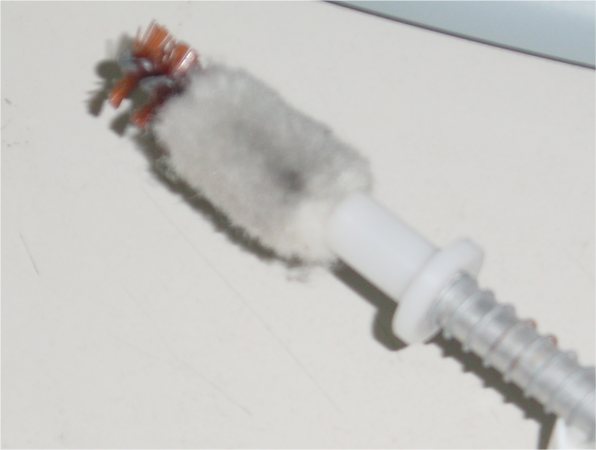 Well, from the instructions, it looks as if the plastic ring is free to travel back on the rod, against the spring tension. And yes, dear reader, it does, so at least the brush will go in the barrel. But wait, there is more, as soon as you touch the tip of the brush, a click is sound and the rod is locked in its extended position. Hmmm, this is getting wierd. Let's try to put this thing in a barrel. According to the instructions, you do not have to disassemble the pistol to use the rod, which means that the rod is designed to enter the pistol's barrel from the muzzle end. Make sure your magazine is removed, lock you slide back and insert the sweeper from the muzzle end.

I tried that, and yes sir, it sure does go in, while the plastic ring is stopped of course at the muzzle. OK, so far, what we've got is a cleaning rod, which operates in a wierd way, but which seems to do the job. Let's try some Hoppe on a patch with it. The task is performed as described and a dirty patch comes out, when the sweeper is pulled back out of the barrel. Another patch with some gun lube on it, and you are done cleaning that barrel. Wait a minute, the barrel is clean and your hands are not dirty!! Neat! Typically, after I clean my pistol, my hands are filthy, not this time though.

OK, and now the fun part. Just press that same little button again, while holding the sweeper with the brush upwards, and the whole rod retracts inside the cylinder. Cap it up, and you are done. You can now toss it in your shooting bag and have it handy for the next shooting session.

So, is the Bore Sweeper convenient? It sure is. At least for those times you do not want to strip the pistol and do a full cleaning/lubricating job, it makes life much easier. No dirt to mess up with, no plastic containers to store the dirty brushes, no lost brushes. I liked that thing a lot, it has gained a place in my shooting bag. The Bore Sweeper comes in different versions, to be used with either pistols or revolvers, of various barrel lengths, and there is a generic version, for those who have a gun not covered by the specs of the Sweeper models available.

Roy, thanks for sending the Sweeper to me, I appreciate it.