Kimber is the company who changed the way people looked at M-1911 pistols. As Dick Metcalf wrote in SHOOTING TIMES, "...Kimber has rewritten the book on the 1911 and raised the bar so high for Model 1911 price/features packaging that Colt itself has acknowledged it's a major reason why that company's premium-priced basic 1911 line has essentially disappeared from the marketplace."

Kimber's pistols feature a frame and slide machined from steel forging and a forged barrel blank. They include such custom features as beveled magazine wells, dovetailed front and rear sights, relief cust under the trigger guards, and lowered and flared ejection ports. Many of the pistol's smaller parts are McCormick's, including the trigger group, thumb and grip safeties, magazines, ejector and extractor.

Their line includes the following pistols :

Identical in features to the Custom with a satin finished stainless steel slide and frame. The perfect .45 for hard duty or use during periods of extended exposure to weather where regular cleaning is not possible.

All the features of the Custom, but with a deep polished blued finish, hand checkered rosewood grips and long guide rod. Two eight round magazines are included. A beautiful and extremely accurate .45.


There is also a model called Custom Target II, which features an adjustable rear sight, instead of the fixed one. This last one comes also in a Stainless Steel version.

All the features of the "Custom Royal II" plus the Bo-Mar BMCS low mount rear adjustable sight, fancy hand checkered diamond pattern grips, one ten and one eight round magazine. Factory test target is included with each gun. Perfect for Limited Class IPSC competition or as a top-quality carry gun. It also comes in a Stainless Steel version.

Lately, Kimber has start producing some compact models, which are:

which has all the features of the Compact, along with a satin finished stainless steel slide and frame. Like the Compact, the Compact Stainless frame, slide and barrel are machined from forgings for precision and long life.

which has all the features of the Compact, along with a frame machined from an extremely pure and hard grade of aluminum called 7075-T6. The Compact Aluminum weighs 6 ounces less than the steel frame Compact models. It is finished in matte black.

The new for 2002 Eclipse II series of Kimber was named the "Handgun of the Year" by the Shooting Industry Academy of Excellence. Each Eclipse II slide and frame is machined from a solid stainless steel forging. After finishing the entire pistol in matte black oxide, all flat surfaces are brush-polished. This leaves inset and curved surfaces matte black and gives these pistols a dynamic finish that is both functional and durable. Black small parts and silver/black laminated grips add to this great look.

The Eclipse Ultra II™ features a 3-inch bushingless bull barrel. It is also the only short-barreled Kimber pistol that does not have an aluminum frame. With a seven round magazine it is ideal for concealed carry and personal protection.

The Eclipse Ultra II has all the features of the Stainless Ultra Carry II, but the frame is machined from a stainless steel forging. Both slide and frame have a brush polished matte black finish. Small parts are black and laminated grips are silver/black. Custom Shop features include 30 LPI front strap checkering and fixed Meprolight 3 dot (green) night sights.

The Eclipse Pro Carry II is based on the Pro Carry II. It has the features of the Eclipse Ultra II, plus a 4-inch bushingless bull barrel and full length grip frame. The Eclipse Pro Target II is identical other than sights. It is the first Kimber 4-inch barreled Kimber pistol with the adjustable Meprolight Bar/Dot night sight system.

Of particular interest, are the pistols produced by Kimber's custom shop. Some of them are shown below:

Kimber is also marketing a .22 LR conversion Kit for the M-1911 Pistols. Here is a picture of it: 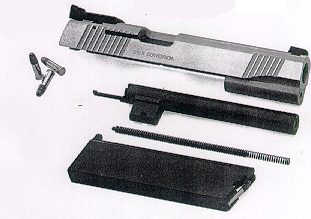 If you want to read more about this kit (and have Adobe Acrobat installed in your PC), click here to view the manufacturer's leaflet about this piece.

Here is the Kimber Rimfire Target, as it is called. 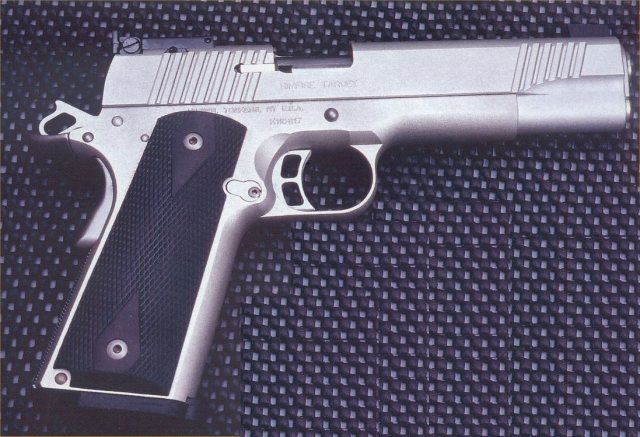 Here is this lovely pistol, stripped down. 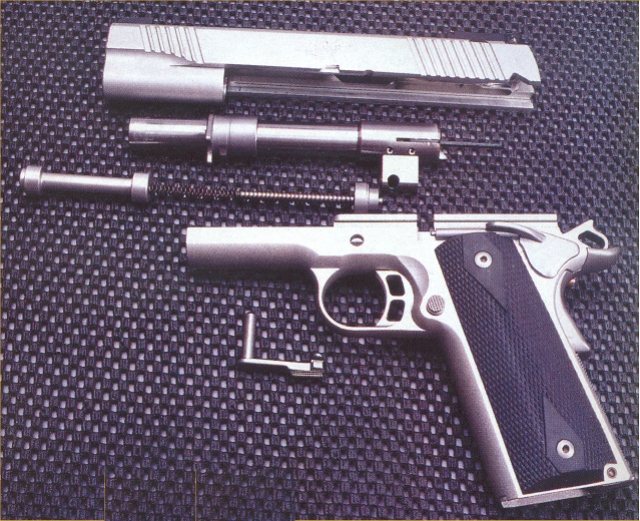 Here is the ejector of the pistol. Note that it is not mounted on the frame, per the usual 1911 method, instead it is installed on the barrel. 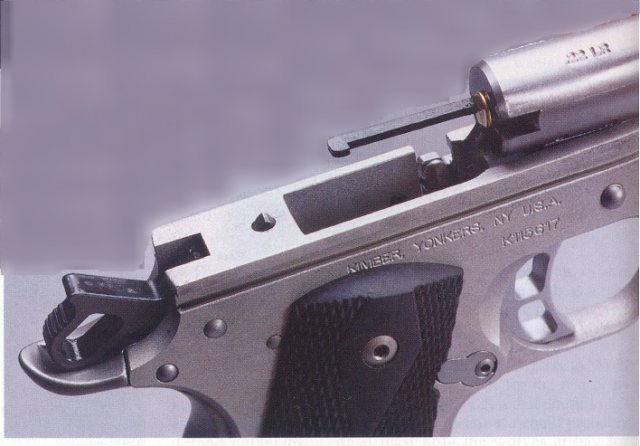 And finally, here is the plastic magazine that Kimber created for this pistol. This magazine is designed in such a way, so that it eliminates the problems that most user face, when using .22LR magazines in a 1911 pistol (with a conversion kit obviously). 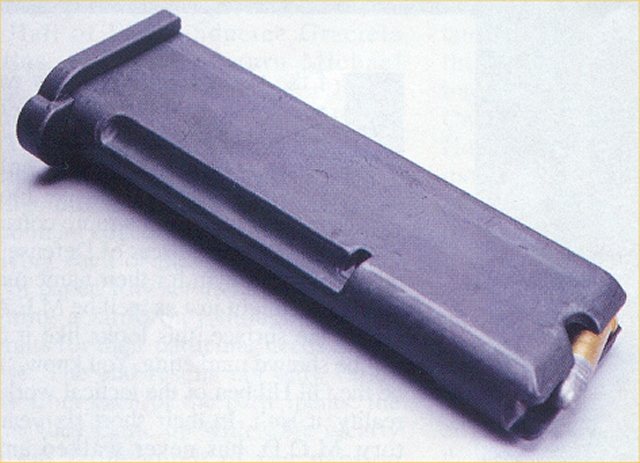 Kimber will also offer a traditional .22 LR conversion kit, based on the slide of this pistol, so the kit shown above, would probably be discontinued.

If my financial situation would allow it, I would get one, as soon as possible. Oh, yes, I might as well calm down, getting a .22LR pistol, means that every year, I have to participate in at least 6 additional shooting matches, in order to maintain my permit. This means that I have to do 14 matches every year, which is kind of too much, given my limited free time.

One more thing, people have been asking: What is the difference between the Kimber pistols which are designated as "II" and the ones without the "II" in their name. Well, Kimber has addopted in their 2002 line, a passive firing pin safety, similar to the one used in Colt Series 80 pistols, only this device in Kimber's case is activated by the grip safety of the pistol, instead of the trigger. The device is based on a William Swartz pattent of 1939, and you can see two diagrams below, showing its operation: 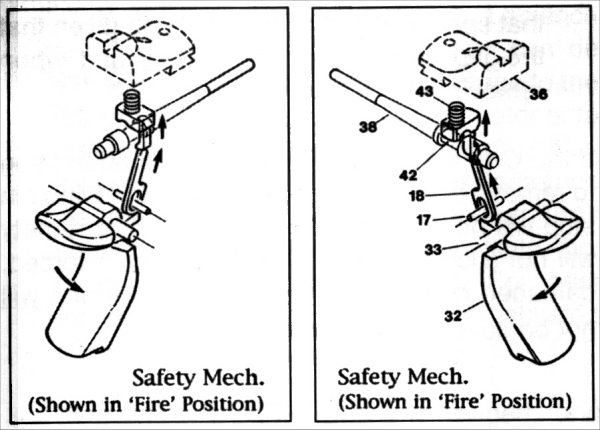 This same safety device has been used by Colt in some guns produced before WWII. Why on earth they choose to use a trigger-actuated safety in their Series 80, is anybody's guess! Kimber's implementation does not alter the trigger pull mechanism (so important for the accuracy of fired shots), while still providing the desired security effect. Thumbs up Kimber!

A more technical article describing the Swartz safety mechanism, can be found here (a new window will open, close it to return here).

(The above information and the drawings have been kindly provided by Kimber, thank you gentlemen.)

Below, you can see a table with some Kimber guns specifications: