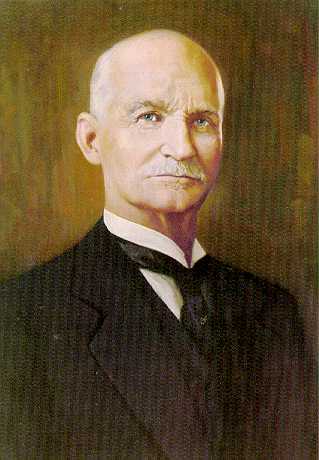 John Moses Browning was the most famous and competent gunmaker the world has ever known. He was the son of Jonathan Browning, himself a highly competent gunsmith, and Elizabeth Clark.

John Moses was born January 23, 1855 in Ogden, Utah, U.S.A., where his father settled after the Mormon Exodus of 1847. It was in his father's shop that John Moses first learned the art and secrets of gunsmithing.

John Moses, however, was much more than a gunsmith in the sense that he was much more interested in designing and building new, innovative, firearms than repairing broken ones. His first creation was a single shot rifle he built at the age of 14 for his brother, Matt. 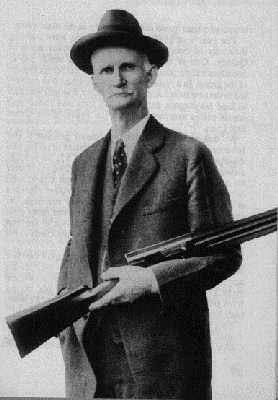 1879 was an eventful year for the Browings. Jonathan Browning died on June 21 and, soon thereafter, John Moses and his brothers started their own shop. There they first used steam powered tools, tools that were originally foot-powered but were converted by John Moses to get power from a steam engine. That year also saw John Moses marry Rachel Teresa Child, and his receipt of his first gun patent (No. 220.271) for the Breech-Loading Single Shot Rifle.

John and his brothers began producing this rifle in their Ogden shop but customer demand soon exceeded their shop's production capacity. They were unable to expand the "Browning Gun Factory," as their shop was called, because they lacked the capital required for expansion and didn't have a well established distribution channel to market their products. One has to note here that although John Moses Browning was very satisfied with the sales of his guns he was also very unhappy that the production chores and the daily work prohibited him from working on his new ideas.

A salesman for the Winchester Repeating Arms Company named Andrew McAusland happened to see one of John's Single Shot rifles in 1883. McAusland immediately bought one and sent it to Winchester's headquarters. The gun drew Winchester's interest and T. G. Bennet, Winchester's vice president and general manager, went to Ogden to buy the rights to Browning's gun. When Bennet arrived in Ogden, it didn't take long for the men to agree on the sale and Winchester paid John Moses $8,000 for the rights to produce the gun. The agreement was beneficial to both parties. Winchester was happy because they turned competitor into a benefactor, plus they added an excellent rifle to their product line. John Moses was equally happy because the money from the sale and the ensuing relationship with Winchester allowed him to concentrate on inventing things instead of manufacturing them.

At the same time, John Moses was also working on another of his ingenious ideas. He wanted to invent an automatic shotgun that would use the expanding gases of a fired shell to recock the gun and make it ready for the next shot. John got this idea while watching a friend of his, Will Wright, shoot his Browning-made rifle. A clump of weeds just in front of the firing line bent with the muzzle blast. This gave John the idea of using the gases for something productive like cocking the gun. He designed a testing gun with which he tested his ideas.

When the testing validated his theory, John applied the principle on three different guns: two machine-guns and a repeating shotgun. His machine-guns, the first fully automatic guns which used expanding gases for cycling, were later sold to Colt and the U.S. Government and served the U.S. Armed Forces through three wars. One was Colt Model 1895 Peacemaker machine-gun, while the other was the famous Browning Automatic Rifle, affectionately called BAR by GI's. Browning's machine-guns are still used by US and other armies around the world.

The repeating shotgun that John invented was the primary reason for the break between Browning and Winchester. When Winchester denied production of this gun, John Moses, packed a sample of his shotgun into his luggage, crossed the Atlantic, and negotiated an agreement for Fabrique National de Belgique (FN) to produce his gun. FN was then a young company in dire need of products to produce. Browning's automatic shotgun revolutionized the hunting market. This same shotgun was later produced in U.S.A. by Remington, as their Model 11. Still later, variants of this shotgun were produced by almost all of the large shotgun manufacturers, including Savage, Franchi, and Breda.

John M. Browning was usually working on more than one project at one time. He started working on automatic pistols before 1900. He was the first to invent the slide which encloses the barrel and the firing mechanism of a pistol. Pistols of his invention were produced by both FN and Colt and they range from baby .25 caliber pistols to the .45 Government Model. The first automatic pistol designed by Browning was produced by FN as FN's .32 caliber Model 1900. The most famous pistols of John's design, however, were Colt's .45 ACP M1911 Government Model and FN's Browning High-Power Model P-35 in 9mm Parabellum. A highly decorated sample of P-35, is shown at left, while a contemporary version customized by Wayne Novak can be found here.

John Moses Browning passed away in Liege, Belgium, the day after Thanksgiving, 1926. He died of heart failure while in his son Val's office at the FN factory. It was the last day on earth for this ingenious person who invented more firearms than any other gunmaker in the history of the world.

This medallion was produced by FN to honor the great gunmaker.

Most material on this page was taken from the book "John Moses Browning, American Gunmaker" by John Browning and Curt Gentry (second edition with postscript by Col. W.R. Betz). I would like to express my gratitude to Browning Corp.

and, especially, Mr. Paul Thomson, Public Relations Manager, for permission to reproduce parts of this book on these pages.

Finally, this brochure is a tribute to the man, who gave us the 1911 pistol, as well as so many other noteworthy firearms, courtesy of Herstal Group.