During the M-1911 Pistols Home Survey, run in June and July 1997, it was shown that a lot of people would like to see ammunition information, in these Pages. However, this is not easy for me, as I live in a country which is too far away from where most ammunition is produced. Very few brands are imported regularly in Greece, and the cost of ammunition is really high (about 30 US$ for a box of 50 230gr FMJs).

As a result, it is not easy to collect data and information about ammunition. Also, the 1911 has been chambered in so many cartridges during its life, that it requires a separate site, to list information about every cartridge that this pistol can fire. As a result, in the following paragraphs, you will find some general ammo notions, as well as some (by far not all) cartridges available, in the most widely used caliber in the 1911 world, the .45 ACP. 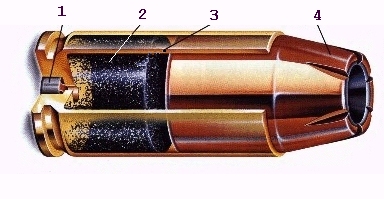 First of all, some basic terminology. In the picture on the left, (1) is the primer, which is hit by the firing pin, when one pulls the trigger. The primer produces a flame, which ignites the powder (2), inside the cartridge shell (3). The burning powder produces huge amount of expanding gazes, which push the bullet (4), away from the cartridge shell, down the barrel and towards the target.

There are several different types of these components. For example, there are at least two different kind of primers (small and large pistol primers), several hundrend different kinds of powder, and several kinds of bullet design. Here are some of the most well known.

Of course, some manufacturers are producing bullets, which are somewhat different than the above, and are known with proprietary names. For example, Winchester's Silvertip or Winchester's Expanding Point Bullet, shown below.

Each manufacturer is usually offering several loads in .45 ACP. In the following section, you can see what the industry has to offer, in this caliber.

Under ATK's roof, there are several well-known brands of .45 ACP ammo. The following loads are available.

Corbon has also announced their new Bee Safe ammo line. Bee Safe is a new, self-defence ammunition, consisting of a prefragmented round (BeeLine) with the following characteristics:

The bullet consists of a copper jacket. At its lower end, there is a blue plastic plug, which keeps weight down and moves bullet mass to the front, improving bullet stability. On top of the plug, there are a number of shotgun pellets, whose number varies with the caliber. Finally, on the top of the bullet, there is a swagged lead disk, crimped into the jacket's mouth. For our M-1911, the following rounds are available:

Limited tests performed by Combat Handguns (issue of June 1999), failed to impress me. Several rounds failed to expand and fragment from the above mentionned barrels, while 2 out of the 5 .45 ACP rounds fired, did not stabilize and keyholed. In general, considering the problems associated with such ammunition (a. high price and hense limited practice, b. they usually tend to hit very low compared to standard rounds, c. due to their non-uniform core, their accuracy is not the best possible etc), I consider a good JHP round to be much better proposition. 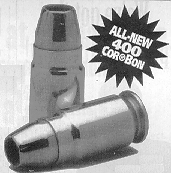 Cor-Bon is also offering the new .400 Cor-Bon cartridge, which is supposed to work in any .45 ACP pistol, with a simple barrel change. The .400 Cor-Bon cartridge is a .40 caliber round, pushing a 135 gr JHP bullet at over 1450 fps. That should provide some performance boost for the old Bigmouth.

This new line of ammunition is loaded with the first intelligent bullet, made of an alloy (no lead) with a low specific weight. This feature allows light bullets like these to have a size similar to those projectiles made from lead. They call them intelligent bullets because they recognize the hardness of the target at the moment the projectile hits it, and in nanoseconds the projectile configures accordingly. Thus, if the target is very hard, the IQ bullet will have superior penetration while maintaining its weight and size. If the target is ballistic gelatin, it will not overpenetrate, transferring all the energy into the soft target, and breaking apart into three or four sharp fragments, each creating independent wound channels. Two additional features that make this high performance ammunition unique is that they can be fired in any firearm made for the corresponding caliber, without any modification to the firearm, and recoil is not greater than when shooting regular ammunition. The IQ line of ammunition was specially developed with personal defense and law enforcement applications in mind and it is also suitable for hunting.

Distributed in USA by Cole Enterprises Inc., IMI ammunition can now be purchased at very competitive prices. The site of Cole has a list of the calibers available.

Georgia Arms is a reloading company, brought to my attention by some nice visitor of this site. Check their offerings:

Triton are offering two lines of ammunition for the .45s. The first is the QuikShok rounds. Their QUIK-SHOK ammunition features a patented, high velocity hollow point bullet developed by Tom Burczynski. The QUIK-SHOK round was designed to provide controlled fragmentation on impact. During penetration, the bullet expands very rapidly and then splits into three sections which continue to penetrate in three directions over an ever-widening area within the target. This dynamic terminal action results in maximum energy distribution and multiple wound channels. Ultimately, this unique Hyper-Stressed™ bullet technology provides extreme accuracy and delivers a new level of stopping power which far exceeds that of conventional hollow point ammunition and even ultra-high-performance fragmentary rounds.

The most important advantage gained with the Quik-Shok is the tremendously rapid energy transfer which is diffused over a large area within a living target. As each sheared segment is independent of one another, this unique terminal action promotes the compression of nerve-laden tissues trapped between expanding temporary cavities which results in maximum motor interruption. A second prime advantage, although a natural consequence of the dispersion action already cited, is that the cone shaped segment pattern which develops brings about a much greater increase in the odds of striking or affecting one or more vital organs -- even in the event of a poorly-placed bullet.

Triton's second Line is Hi-VEL ammunition range, in which they have both .45 ACP loads and the famous .45 Super (this link will open a new browser window. Close it, to return here.) loads. Hi-Vel ammunition is loaded to a specific velocity in each caliber in order to optimize the attributes of a particular bullet. This painstaking approach renders custom ammunition that is unaffected by short-barreled handguns and energy -robbing materials like heavy clothing. Here are their offerings :

On Triton's site, you can find a very useful F.A.Q. (Frequently-Asked-Questions) for the .45 Super (this will open a new browser window).

GLASER SAFETY SLUG, Inc. developed the first frangible bullet in 1974 to provide reduced ricochet and over-penetration danger with improved stopping power over conventional bullets. In 1987, GLASER developed the round-nose frangible bullet offering guaranteed feeding reliability. In 1988 GLASER introduced the compressed-core bullet to maximize bullet weight and the number of bullet fragments. This precision formed bullet also produces target grade accuracy, seldom found in a personal defense bullet. In 1994 GLASER improved fragmentation reliability to below 1000 feet per second through the use of soft, rather than hard plastic in the bullet tip.

Glaser has a FAQ available for those interested. Go check it out, then close the new browser window to return here.

Here are some other links, which relate to reloading and street effectiveness. Do check them out, they are quite interesting. As always, the visitor is advised that the information contained in outside links, are neither verified nor approved by me. Read, think and decide for yourself.

I'll be adding information here, as I get them. Please do not e-mail me asking for more details, I am not the right person for this.