Colt's Model 1911 (and all its clones) is an autoloading pistol, firing from a closed breech. Like all pistols, its operation is based on the action of the gases produced when a cartridge is fired. These gases are used to cycle the slide of the pistol, whose recycling action will eject the spend cartridge case, cock the hammer and reload the next cartridge, in the pistol's chamber, for firing.

In the following paragraphs, I 'll try to describe the way the pistol works, in simple words. If you are new to the M-1911 pistol, I would suggest that you download and print a copy of the pistol's drawing so that you can identify each part described.

As with all the pistols I know, Model 1911 uses a magazine to hold the rounds. M-1911 mags hold 7 or 8 rounds, although there are pistols based on M-1911 design, that are of higher capacity (usually 12-14 rounds). These pistols follow the same basic principles of operation as the standard M-1911.

The operation of almost all modern pistols, is based on one of the most ingenious inventions of the firearms industry. Try for a moment to figure out, what the pistols from Colt, Sig Sauer, Glock, Smith & Wesson, CZ-75, Astra, Llama, Tokarev, Walther, Ruger etc, have in common. There is one single thing that most modern pistols share. And this is...(well? what do you expect to select this link? Remember to come back though!).

This ingenious mechanism is the basis on which all modern pistols operate. Let's describe that function in details. Initially, a full magazine is inserted in the gun. Let's also assume for the moment, that there is already a round in the chamber. As the shooter fires the gun, the expanding gazes produced by the burning powder, inside the cartridge, start pushing the bullet down the barrel. At the same time, those same gazes, start pushing the cartridge case and hence, the locked slide and barrel to the rear. These three items, are for the time being, locked together.

By the time the bullet has exited the muzzle of the barrel (which means that the pressure inside the barrel has diminished), this last one has reached the end of its rearward travel. Due to the barrel link, which pulls the barrel down, the barrel disengages from the slide. The breech starts opening up. The slide continues to travel backwards, pulling the spend cartridge case with it, which finally ejects from the gun, when it strikes the ejector. The slide, during its rearward movement, recocks the hammer, preparing the gun for the next firing sequence.

During the rearward travel of the slide, the disconnector is also pushed down, preventing the hammer from coming forward again together with the slide, when this last one starts its forward movement again, under the force of the recoil spring. If the disconnector is not pushed downwards, preventing the hammer from following up, a burst would occur, and the pistol would fire in a fully automatic mode. As the slide is coming forward, it strips a new round from the magazine and pushes it forward to the opening of the barrel's chamber. Soon after the cartridge is fully inserted in the chamber, the slide starts pushing the barrel forward.

The most instructional tool you can get, to understand how the 1911 works, can be found below, courtesy of STI International Inc.. It is an excellent animation, which shows you the inners of the pistol. Click on the image below, and the animation will be opened in a new browser window. To see the way the pistol works, start clicking on the various checkboxes that exist in the picture. Amazing work! 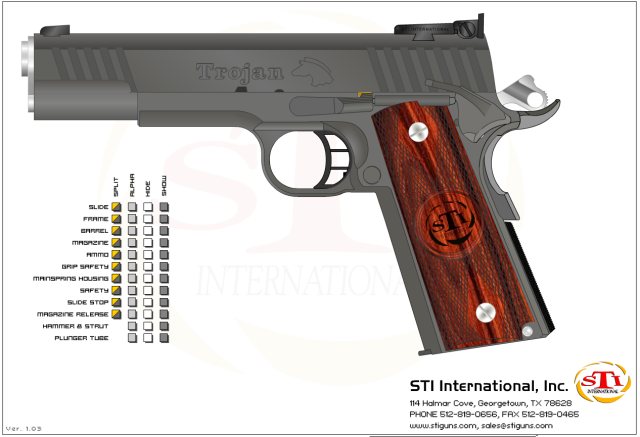 Again, due to the barrel link, the barrel starts moving upwards also, and finally the barrel's lugs climb on the slide stop axle, and the barrel and slide lock together, one inside the other and the breech is again closed, allowing the gun to be fired again.

Here is a more detailed animation of the functional parts of the M-1911.

(click on the image above to see a full pistol animation)

Here is a sideview animation showing the operation of the M1911 during firing (thanks to Sterling Roth, a member of our Forums Site).

This sequence of events happens every time your trusty Model 1911 is fired. You can read more details about the exact role of each one of the gun's parts, in the Parts Description section of these pages.

You may also find an accurate description if the full operation cycle of the M-1911 pistol, by Jerry Kuhnhausen, in the Technical Issues folder.

You may also find another description of the operation of the M-1911 pistols in The Home Page of Michael Kay, in Australia (a new browser window will open. Close it to return here.).

I got the idea for this description from an article by Row Ruel, published in the 1989 Handguns Annual of Guns & Ammo. Thanks Roy!